Nathalie Miebach in the NY Times

An update on Nathalie Miebach, a guest lecturer in 2009:

NATHALIE MIEBACH uses science to make art. A sculptor who lives in Brookline, Mass., she translates weather data and other scientific measurements into three-dimensional objects that accurately display temperature variations, barometric pressure and moon phases, among other things. 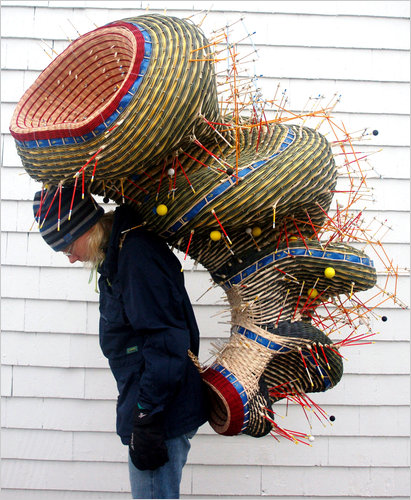 Matthew McCrory, on the other hand, uses art to benefit science. A former lighting artist at DreamWorks Animation, he now uses his skills at the Center for Advanced Molecular Imaging at Northwestern University to help researchers in Chicago see their work in 3-D.

Ms. Miebach and Mr. McCrory may appear to be engaged in very different pursuits, but their goal is the same: to promote understanding by finding new ways of seeing the world. They’ve never met, but both are invested in the idea that better visualization leads to better thinking.

“You make discoveries much quicker when you have a different way of viewing your data,” says Mr. McCrory, whose official title is lead visualization engineer. “And your brain doesn’t have to work as hard to try to figure out what things are really like.”

Both have been in the news of late. In March, Northwestern unveiled what it calls a classroom unlike any other: a room that Mr. McCrory designed and outfitted with 46-inch televisions — 25 of them, stacked five by five — that operate as a huge, high-resolution canvas upon which atoms, proteins and even whole animals can be displayed in all their three-dimensional glory.

For her part, Ms. Miebach was named one of 20 fellows who will participate in the annual TEDGlobal conference, which promotes the convergence of technology, entertainment and design.

Before she headed to Edinburgh, where this year’s conference convenes on Monday, she spent some time with me on the phone describing her work. She said her sculptures, while representations of meticulously gathered data, seek less to teach viewers explicitly about science than to make them think about how they think.

“The purpose of these pieces is not a didactic one: to explain a specific act of weather or climate change,” she says. “It really is to reveal the beauty of complexity. The work addresses broader questions than the numbers I’m translating. It forces the viewer to think about the visual vocabulary they associate with science versus art.”

That phrase “science versus art” could be an accurate summary of Mr. McCrory’s work, too. While getting his bachelor’s degree in computer science (and for some time after he graduated), he was a researcher at Argonne National Laboratory, doing software development and design for visualization devices. Then he spent a year as a lighting technical director at DreamWorks, working on the movie “Shark Tale.” Then he toggled back again, working at the University of Chicago on visualizing of CAT scans and M.R.I.’s for surgeons. Then he returned to DreamWorks for a few more years, working on “Flushed Away” and “Kung Fu Panda.”

“The scientists at Northwestern do physics, chemistry and biology really well, but they generally don’t have a clue when it comes to making good-looking images,” he said. “A lot was getting lost in translation.”

So when he had a chance to join the university’s information technology wing to try to correct that problem, he jumped at it.

His first assignment was in the astronomy department, visualizing the evolution of binary star systems. Then he reconnected with one of the professors who’d helped recruit him, Thomas J. Meade, who was in the midst of designing the Center for Advanced Molecular Imaging, with the goal of having biologists, chemists, engineers and theoreticians work together. Mr. McCrory’s dream of creating a 3-D display for scientific data fit directly into Dr. Meade’s vision.

“I said: ‘I don’t care what it costs. We’ve got to do this,’ ” Dr. Meade said of that $350,000 project. He hasn’t been disappointed. “If we put glasses on you and display a rabbit brain on the screens,” he said, “you’re no longer looking at it, you’re walking around in it.”

Coincidentally, astronomy is what Ms. Miebach was studying at Harvard Extension School when she discovered her life’s work about a decade ago. She was learning basket-weaving at the time, too, and would arrive at her evening astronomy classes with all her art materials and tools in tow.

“I’d be looking at these incredible images of the deepness of space and time projected against a flat wall. And it was very frustrating,” she said. “I decided the only way I could really understand it was if I could find a way to make it three-dimensional.”

Instead of a final paper, she submitted a woven basket that was her 3-D translation of the Hertzsprung-Russell diagram, a scatter graph used to track evolutionary stages of stars by luminosities, among other things. Her teacher loved it and asked her to present it to a conference of science teachers. She has also spoken at Harvard Medical School and the M.I.T. Lincoln Lab about her work, which has created 3-D representations of tidal rhythms in the Antarctic and Cape Cod, the ecological conditions that attract right whales, and the type and speed of clouds.

To Ms. Miebach, accessibility is key. She incorporates what she calls “the language of play” into her pieces: beads, rods and wheels in primary colors that evoke Tinker Toys or Legos. “When you present the viewer with graphs and charts and data sheets full of numbers about climate change, say, that’s an incredibly intimidating thing,” she said. “But you present that same information through this weird, almost roller-coaster-y looking organic form, it lures them in.”

Dr. Meade says the same of Mr. McCrory’s wall. “On the one hand, it’s eye candy,” he said. “Undergrads in front of a big 3-D display? They’re going to be pulled in.” But that’s just the beginning. “We are translating computational theoretical data that could not be seen in any other way,” he continued. “Astronomy, chemistry, biology — there isn’t any place we can’t touch.”